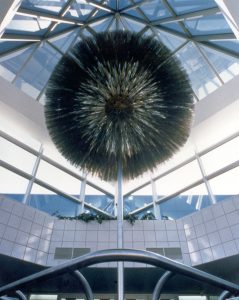 A giant dandelion is growing in the west lobby of the Milton R. Abrahams branch! Harry Bertoia's sculpture entitled, "Sunburst," created in 1963 of gold-plated stainless steel, was constructed to create this circular effect.

The sculpture was originally made for the Edward Durrell Stone Building in Los Angeles. The sea air and salt water proved harmful and an indoor location was needed.

The Joslyn Art museum acquired the piece in 1972. It was relocated to Abrahams Branch when the museum's fountain court was remodeled. The atrium at the new library was designed specifically for "Sunburst."

Harry Bertoia was born in San Lorenzo, Italy, in 1915, and immigrated to the United States in 1930. By the 1950's he had emerged as a premier architectural sculptor.

Copper or bronze were his metals of choice. He was fascinated by the principles of sound waves and music and their relationship to architectural sculpture. Many of Bertoia's pieces are owned by regional museums and the Metropolitan Museum of Art in New York. "Sunburst" is an example of Bertoia's mature style.

View this art in a 3D virtual tour!, opens a new window 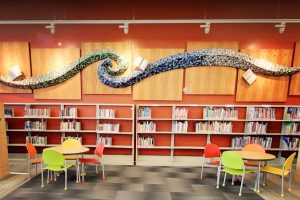 This sculptural wall relief represents the connection between the past, present and future of the Abrahams library and the Northwest Omaha community. Students created the piece from several components. They constructed the two project support sheets from oak veneer plywood, finished with Danish Oil for a natural, matte effect. Flowing across these pieces is an organic, swirling 3-D form created with polystyrene foam insulation and wrapped with medical-grade fiberglass casting tape. This form represents the community’s rich past, present and future and is covered with broken tile in a grouted mosaic style. The tiles gradually fade from earth tones of brown and gold on the left to represent the past, into blues and greens for the present, finally concluding with light blues and grays representative of the future. As an accentuating element, a mold has been created from an actual book, open, as if “in flight.” This book is cast three times in aluminum and mounted on the sculpture at different angles to represent the enduring influence of the library on our community.

View this art in a 3D virtual tour!, opens a new window