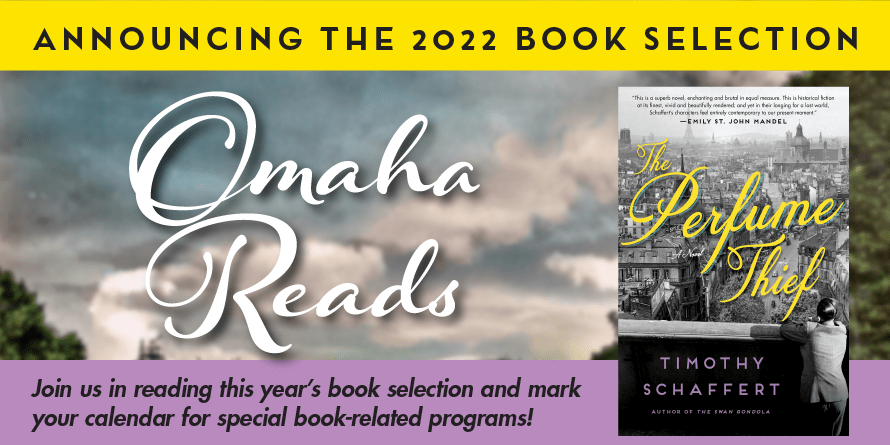 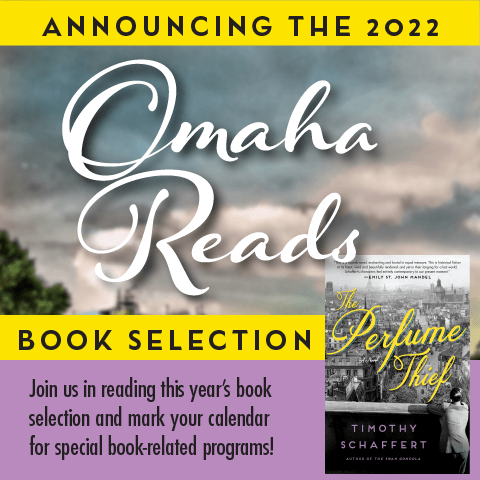 Each year, Omaha Public Library encourages the community to join together in reading one book as part of Omaha Reads. Omaha Reads promotes literacy and provides the City with a common theme to discuss. One book is selected through a public vote and promoted through book talks, author visits, and related programs.

"The Perfume Thief" by Timothy Schaffert 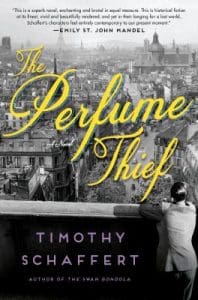 “The Perfume Thief” is a stylish, sexy page-turner set in Paris on the eve of World War II, where Clementine, a queer American ex-pat and notorious thief, is drawn out of retirement and into one last scam when the Nazis invade. Complete with romance, espionage, champagne towers, and haute couture, this full-tilt sensory experience is a dazzling portrait of the underground resistance of twentieth-century Paris and a passionate love letter to the power of beauty and community in the face of hate.

“This year, our community has selected a rich and entertaining work of historical fiction,” said OPL Executive Director Laura Marlane. “We look forward to presenting programs to help readers explore some of the prominent themes presented in this book.” 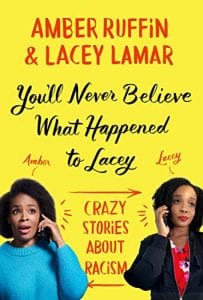 The authors are sisters and both originally from Omaha. Ruffin now lives in New York and works as the host of The Amber Ruffin Show. Lamar still lives in Nebraska, and shares stories from racist donut shops to strangers putting their whole hand in her hair, from being mistaken for a prostitute to being mistaken for Harriet Tubman. These absurd anecdotes illustrate everyday experiences of racism with humor and heart.

“Knowing that many of the stories shared in this book happened in our community is eye-opening,” said OPL Executive Director Laura Marlane. “This book provides a unique opportunity to explore and discuss challenging topics through a local perspective.”

OPL offered several programs in September, including a virtual visit with the authors, book discussions, and a closing reflection. The book was checked out 1,142 times, and more than 115 people attended the online events. A video of the author visit may be viewed at youtube.com/OmahaPublicLibrary, opens a new window.

"After the Flood" by Kassandra Montag 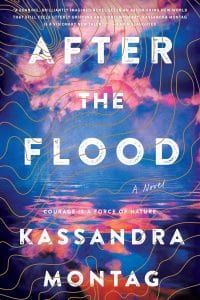 “After the Flood” is a debut novel imagining a future in which flood waters have progressively destroyed America as we know it, leaving only mountaintop communities surrounded by water. Myra and her 7-year-old daughter Pearl have learned to survive, mostly by remaining fiercely independent, free from untrustworthy relationships. When Myra learns that her other daughter may still be alive, she will stop at nothing to find her.

“We live in a community of readers who appreciate and want to celebrate local authors,” said OPL Executive Director Laura Marlane. “We share in that enthusiasm and look forward to generating more discussion around ‘After the Flood.’”

During the campaign, which ran August-September 2020, the book was checked out 1,391 times. Virtual programming included two book discussions and an appearance by Montag, who spoke about the book and answered questions from the audience. More than 60 people attended these online programs.

"This Blessed Earth: A Year in the Life of an American Family Farm" by Ted Genoways 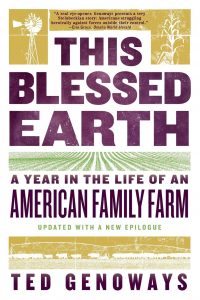 “This Blessed Earth” follows the Hammond family as they navigate the ever-changing landscape of modern farming, exploring how one family struggles to preserve a fifth-generation family operation in the face of shifting trade policies, encroaching pipelines, climate change, and more.

“[The 2019] Omaha Reads selection [was] especially impactful because it [was] also the 2019 ‘One Book One Nebraska’ and ‘All Iowa Reads’ selection, providing our community with even more opportunities to discuss the book and explore its different themes,” said OPL Executive Director Laura Marlane.

OPL presented a variety of opportunities for people to talk and earn more about some of the topics addressed in the book. Programs included:

"The Hate U Give" by Angie Thomas 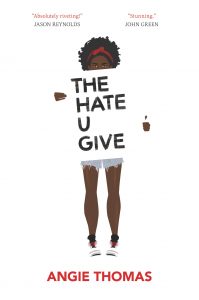 “The Hate U Give” is the fictional story of 16-year-old Starr Carter and how her life changes after being the only witness to her friend's death at the hands of a police officer. This award-winning novel addresses a variety of themes, including racism, community, family, justice, friendship and identity.

OPL worked with a variety of community partners to provide opportunities for people to gather and talk openly about the book's challenging themes in respectful environments throughout the city. More than 370 people attended these events.

"The Hate U Give" was checked out more than 900 times during Omaha Reads, making it the most popular title in the history of the campaign.

"The Bones of Paradise" 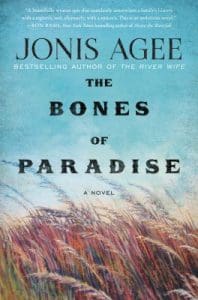 Omaha Public Library celebrated its 13th annual Omaha Reads campaign with Jonis Agee’s "The Bones of Paradise." The novel is set in the unforgiving Nebraska Sand Hills in the years following the Massacre at Wounded Knee. The story that unfolds is filled with mystery, heartache and grit, with two women and their families at the center of it all.

Jonis Agee is the author of 12 books, an English professor at University of Nebraska-Lincoln and one of the founders and editors of Brighthorse Books, opens a new window, a literary press that focuses on poetry, short fiction, novels, and creative nonfiction. Programs explored some of the book's themes, particularly the Native American culture in western Nebraska, including presentations by Joe Starita, author of "I Am A Man: Chief Standing Bear's Journey for Justice, opens a new window," and Joyzelle Gingway Godfrey, a retired college professor who taught Lakota Studies for Sinte Gleska University in South Dakota as well as English and Writing. Agee also held a meet-and-greet at the Milton R. Abrahams Branch and answered questions on a blog post for OPL's website. "The Bones of Paradise" was checked out 380 times during the month of September.

"All The Light We Cannot See" by Anthony Doerr 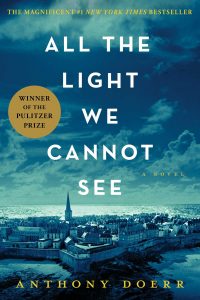 Omaha Public Library celebrated its 12th annual Omaha Reads campaign with Anthony Doerr’s "All The Light We Cannot See". The New York Times bestseller about a blind, French girl and a German boy whose paths collide in occupied France during World War II provided for a variety of discussion topics.

Programs were offered to explore some themes addressed in the book including presentations by Brian York, Curator of Exhibits and Collections for Strategic Air Command & Aerospace Museum; Karen Bachmann, instructor at Pratt Institute and the Fashion Institute of Technology; and Joyce H. Winfield, author of Forever Heroes: A Collection of World War II Stories from Nebraska Veterans.

"All The Light We Cannot See" was checked out more than 520 times during the month of September.

Omaha Public Library celebrated its 11th annual Omaha Reads campaign with Rainbow Rowell's "Eleanor & Park". Set in Omaha, Neb., over the course of a school year in the mid-80s, "Eleanor & Park" is the story of two star-crossed misfits who are smart enough to know that first loves almost never last, but are brave and desperate enough to try.

More than 170 people attended an appearance by Rowell at W. Dale Clark Main Library on Sept. 8. Other programming included comic and zine workshops conducted by The Union for Contemporary Art, and an anti-bullying presentation by the group RESPECT. The programs reflected themes addressed in the book. "Eleanor & Park" was checked out 1,190 times.

"The Meaning of Names" by Karen Gettert Shoemaker 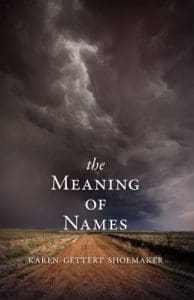 This year the nation recognizes the centennial of the First World War. The sacrifices of men and women on the home front, as well as the violence and hatred that swept across America during World War I (WWI) are addressed in Omaha Public Library’s 2014 Omaha Reads selection, "The Meaning of Names" by Karen Gettert Shoemaker.

"The Meaning of Names" follows the fictional story of Gerda Vogel and her
family in 1918. Even the quiet calm of Nebraska farm country cannot shelter the American family of German descent from prejudice, violence, and a plague unlike the world has ever seen.

"The Meaning of Names" was checked out more than 530 times during the Omaha Reads campaign.

"In Cold Blood" by Truman Capote 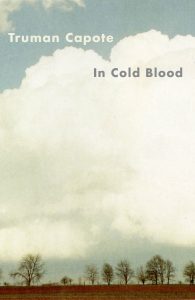 During the ninth annual Omaha Reads campaign, OPL encouraged the community to join together in reading "In Cold Blood" by Truman Capote. The title was selected through an online public vote and the pioneer true-crime story of the 1959 Clutter family murder in Holcomb, Kansas, sparked much conversation and had many people asking what Capote was hoping to accomplish with this work.

"In Cold Blood" was checked out more than 600 times during the Omaha Reads campaign.

"The Age of Innocence" by Edith Wharton 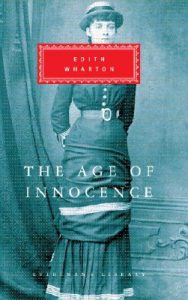 It was the year of Edith Wharton! OPL celebrated Wharton’s 150th birthday by selecting "The Age of Innocence" as the 2012 Omaha Reads title. From lawn parties to Gilded Age fashion shows, more than 500 people attended Omaha Reads programs across all 12 OPL locations.

"'The Age of Innocence' is a great selection for 2012 Omaha Reads," said OPL Executive Director Gary Wasdin. "Not only does it adequately pay tribute to the author's 150th birthday, but the time period has grown in popularity with the success of 'Downton Abbey.'"