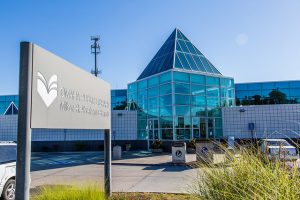 Originally featured in the Omaha World-Herald on November 16, 2013.

“Building a city library near 90th and Fort Streets will put it in ‘one of the hottest development areas right now in the City of Omaha,’ City Council President Bernie Simon said,” in a December 1984 World-Herald article. The library now known as the Abrahams Library, 5111 N. 90th St., was originally tagged as the Northwest Branch and was built in response to a growing population of young families with children in the area. Prior to its groundbreaking in October 1986, the Omaha Public Library Board of Trustees unanimously voted to name the location for longtime library supporter and community philanthropist Milton R. Abrahams.

Abrahams was a local attorney who served on the library board for 21 years, 1957-1978, with 12 years as president. His leadership during the opening of three new Omaha Public Library locations, as well as his significant financial contributions toward the completion of the W. Dale Clark Main Library downtown, made the choice to name a branch after him not only appropriate, but also lauded by the community. The library opened in April 1988 and immediately became one of the busiest in the city.

Abrahams Library was designed by Bahr Vermeer & Haecker Architects to look as little like a library as possible, with the desire to ensure a fresh and modern look well into the future. Its pyramid-like, skylit entrance was designed to showcase the “Sunburst” sculpture by artist Harry Bertoia, permanently on loan from the Joslyn Art Museum. The building underwent a renovation in 2011, and reopened in January 2012 with features to make the facility more user-friendly, spacious and energy efficient.

Because it’s open seven days a week, planning a visit to Abrahams Library is simple and convenient.