If you think libraries are just buildings that hold books, you're missing out! Not only does Omaha Public Library have a huge treasury of books, CD's, DVD's and audiobooks, we also have a collection of art on display throughout the 12 branches. With the help of Google Street View technology, you can now take a virtual tour of each building in its entirety, or stop and appreciate details you might have missed before. Become a digital tourist and learn explore OPL's online art gallery today! 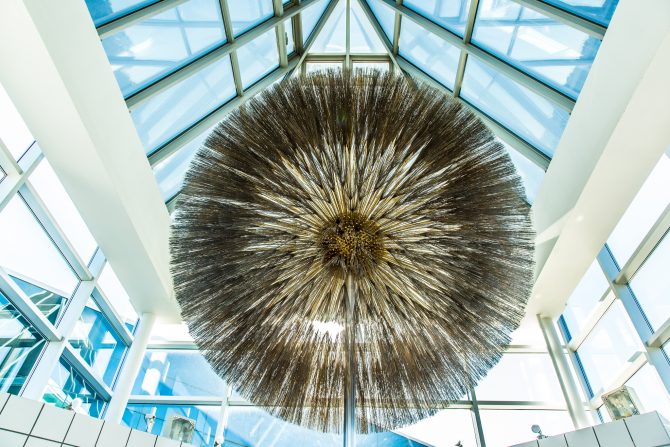 "Sunburst" (Take 3D Tour), opens a new window
Milton R. Abrahams Branch is home to “Sunburst,” a gold-plated stainless steel sculpture by Italian artist Harry Bertoia. The piece looms largely in the atrium, towering over visitors entering the building like an overgrown dandelion. The piece was acquired by the Joslyn Art Museum in 1972, and was installed at the library when it was built in 1988. (Source) 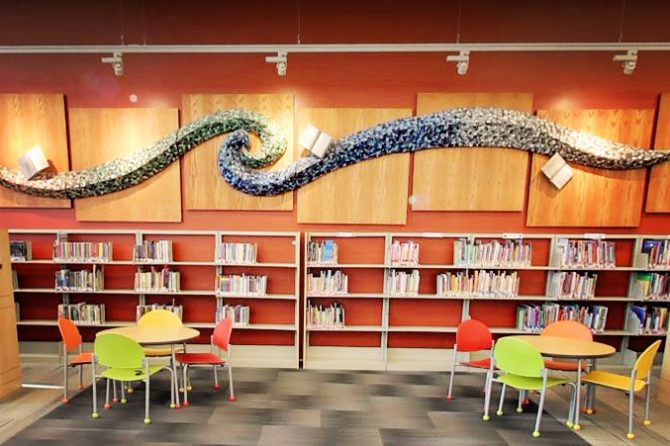 "Art4Omaha TEAM Project" (Take 3D Tour, opens a new window)
This sculptural wall relief represents the connection between the past, present and future of the Abrahams Branch library and the Northwest Omaha community. Students created the piece from several components. They constructed the two project support sheets from oak veneer plywood, finished with Danish oil for a natural, matte effect. Flowing across these pieces is an organic, swirling 3D form created with polystyrene foam insulation and wrapped with medical-grade fiberglass casting tape. This form represents the community's rich past, present and future and is covered with broken tile in a grouted mosaic style. The tiles gradually fade from earth tones of brown and gold on the left to represent the past, into blues and greens for the present, finally concluding with light blues and grays representative of the future. As an accentuating element, a mold has been created from an actual book, open, as if "in flight." This book is cast three times in aluminum and mounted on the sculpture at different angles to represent the enduring influence of the library on our community. 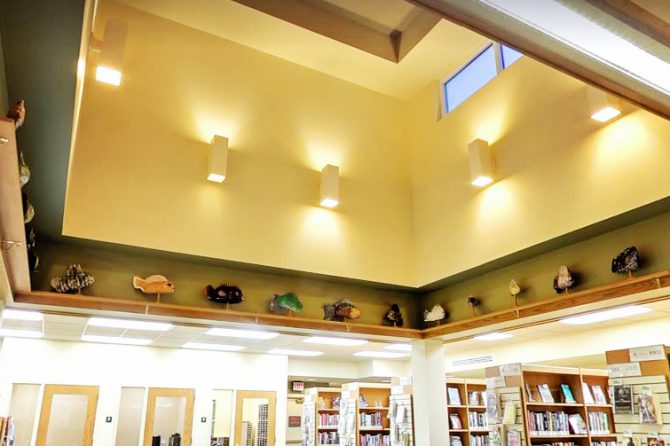 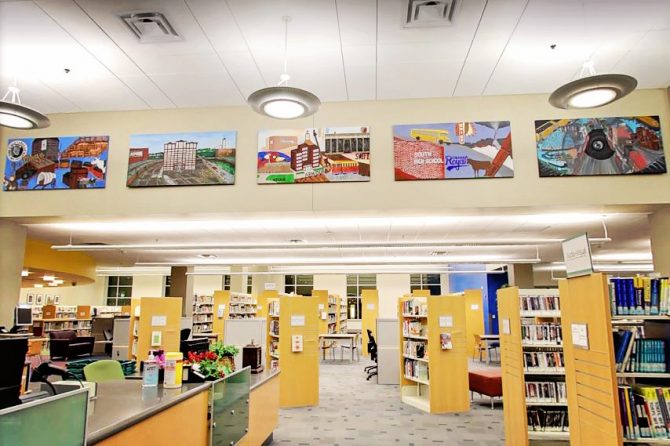 "Art4Omaha Team Project" (Take a 3D Tour), opens a new window
Hanging above the South Omaha Library’s circulation desk is a detailed set of acrylic-on-canvases representing a variety of historical South Omaha mainstays. The succession of paintings was created as a part of the 2006 Art4Omaha’s TEAM “Together Everyone Achieves More” project by a group of students from South High School. Maria Alcala, Brian Coate, Emmanuel Fernandez, Teddy Gonzalez, Melissa Mahoney, Cindy Penalosa, Fernando Pintor, Jessica Ray, Nick Smith, and Emily Wilkins collaborated together to compose a sequence of paintings embodying the spirit of South Omaha’s work, entertainment and barrio traditions. The five panels are united by their bold use of reds and blues and the continuous reference of railroad tracks, creating an overall sense of South Omaha’s chronological melting pot. (Source) 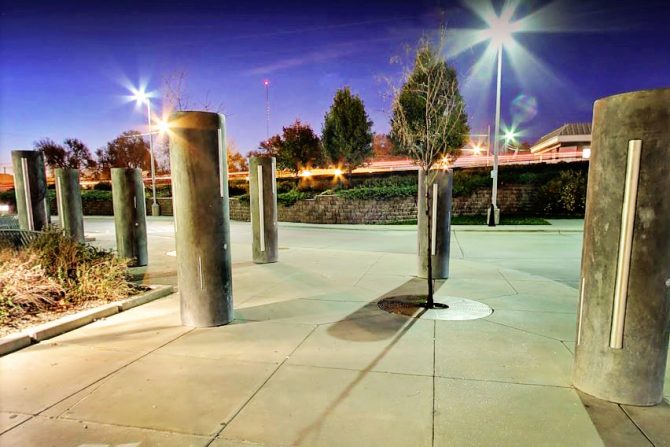 "South Omaha Sound Field" (Take a 3D Tour), opens a new window
Prominently featured outside of the library’s main doors is the South Omaha Sound Field. The artwork, commissioned by the City of Omaha and Metropolitan Community College in 2008, is an interactive sculpture by the Omaha-based artist Jamie Burmeister. The interactive sound installation is a representation of the melding of South Omaha’s cultures through music. When viewers engage the sensors on each of the seven sculptures, the chimes play music. The various compositions change depending on how many sensors are depressed at the same time. Through merging new digital technologies with long-rooted sculptural techniques, Burmeister emphasizes the transitional qualities of the South Omaha neighborhood—a community that utilizes innovations to grow into the 21st century and, yet, proudly upholds the time honored traditions of its many residents. (Source) 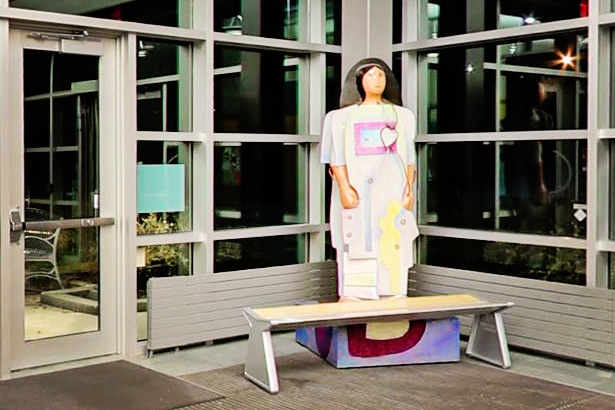 "Corazon De Mi Via" (Take a 3D Tour), opens a new window
Corazon de mi Via (Love of my Life), located in our lobby, is a fiberglass sculpture by Linda Garcia-Perez, made in 2001 as a part of the City of Omaha Public Art Commission’s J. Doe project. Garcia-Perez is a Chicana artist who has been utilizing her extensive knowledge of Mexican/Latino folk arts and culture years to produce, teach, and exhibit bodies of work throughout the state of Nebraska for over 35 years. Corazon de mi Via (Love of my Life) is a vibrant celebration of the artist’s esteem for the hard working women and men in her community. Using a palette that reflects the vivacity of traditional Mexican colors, the piece truly reflects upon what Garcia-Perez holds most dear: her Chicana artistic heritage. (Source) 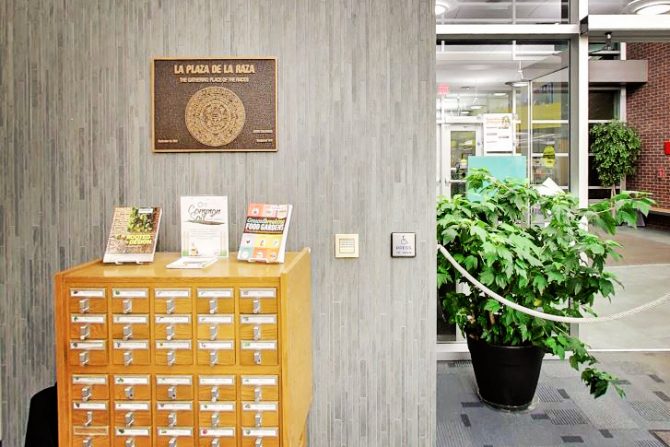 "La Plaza De La Raza" (Take 3D Tour), opens a new window
La Plaza De La Raza (The Gathering Place of the Races) is a bronze plaque mounted on the wall next to the library’s front doors. The piece was dedicated to the Omaha Public Library on September 16th, 1988 as a tribute to the robust and diverse customs of South Omaha’s immigrant community. The plaque’s use of the Aztec Sun Stone reinforces its connection to South district’s multiplicity of ethnic groups and changing populations. Originally hand-carved from basalt between 1427 and 1479, the famous stone is an extraordinary artistic and geometric enterprise. The calendar reflects the Aztecs’ intricate understanding of time and space, as well as their grasp of precise architecture. (Source)