“She’s a joy to talk to and joyous about all things library.” That’s how W. Clarke Swanson Branch youth services librarian Nancy Chmiel described longtime patron Rosemary Mangiameli. Chmiel has become acquainted with Mangiameli during storytimes at the library and learned how Omaha Public Library played a significant role in Mangiameli’s life in recent years.

As a child, Mangiameli always had a library card and was thrilled each time she got to bring home a new treasure. However, as she grew up, the library visits became less frequent, and eventually ceased altogether. Mangiameli married young, had a child, and became busy with family life. It wasn’t until she began to advance her education at College of Saint Mary that she started to spend time in a library again and realized how much she loved it.

In 2005, Mangiameli moved to Dundee and occasionally visited the neighborhood’s A.V. Sorensen Branch and got involved with a book club. When she started visiting Swanson Branch in 2013, something clicked for her and she knew she had found her library “home.” It was around this same time that Mangiameli decided to pursue dual citizenship to Italy. Her family is Sicilian and she felt inspired by her faith to claim and reconnect with this part of her identity.

Mangiameli needed the internet to do her research and file paperwork, but did not have a connection at home, so she turned to the library. The staff at Swanson Branch helped her every step of the way -- and when she started the process, she needed a lot of help! “Russ [Harper] was magnificent,” said Mangiameli. “I learned so much and now I know how to do things on my own.” In addition to acquiring new computer skills, Mangiameli’s efforts were rewarded as she acquired her Italian citizenship in 2016!

Mangiameli still uses the library as a place to check out books and DVDs, but she also comes to the library for its sense of community. She is working on writing a children’s book, and learns so much just from being around youth librarians and the kids who attend storytime. “It’s uplifting to see the kids,” said Mangiameli. “They are so joyful and they make me feel so happy!” She enjoys them so much that she can often be found listening in on storytime. “It gives me great ideas and the librarians are so wonderful with the children!” 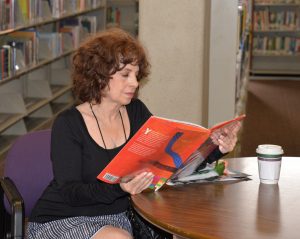 Mangiameli is a great example of someone who found a sense of community at her Omaha Public Library and she encourages others who may not have visited for a while to come back and see everything the library has to offer. “It’s a tremendous asset for all ages,” she said. “It’s a great place for music and movement, keeping minds active, research and games, and being around others.” She acknowledges that though it took a while to make her way back to the library, it is now “a part of me,” and a perfect place to not only connect with a vast wealth of knowledge, but also to forge human connections.