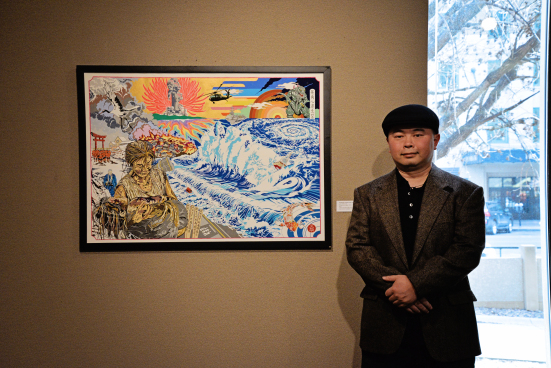 Art has always reflected the culture that it springs from. It’s easy to look at the famous works of the Renaissance era and critique a culture obsessed with aristocracy, religion, and the discovery of oneself as revealed in nature. It’s harder to consider what future critics will take away from the art of the 21st century. This question kept surfacing as I walked through the Michael Phipps Gallery, opens a new window at the W. Dale Clark Library, opens a new window on Friday evening. Every two months the library rotates its exhibit, showcasing local, Omaha artists. Jave Gakumei Yoshimoto’s hauntingly beautiful paintings have just been installed, and though the reception has concluded, the thoughts his art stirred in me have not. 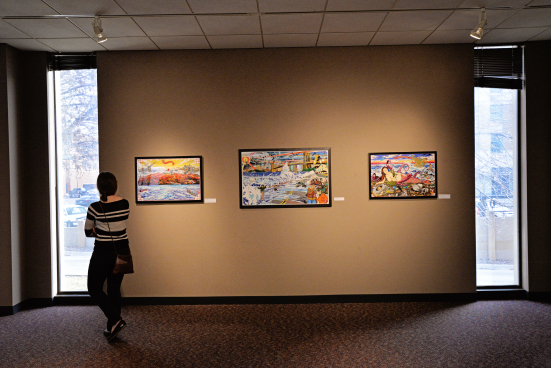 Dozens of library patrons and members of the Omaha art community came out to see and support Yoshimoto, an assistant professor at UNO’s College of Communication, Fine Arts and Media. It was easy to wander through the gallery and strike up conversation about what we were seeing with just about everyone. Yoshimoto’s work is not only technically beautiful, but it necessitates dialogue. The young artist above eagerly remarked that she was fascinated by the way Yoshimoto’s mark making had evolved over the years. His earlier work is also displayed alongside current pieces, and they do seem smoother in their execution than the nearly digitized effects occurring in what he has painted more recently. 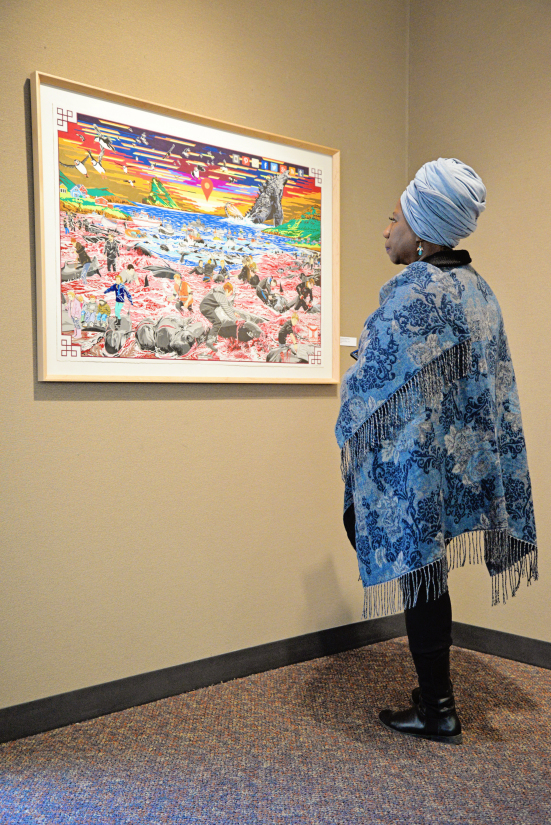 Yoshimoto’s gouache paintings drip with social commentary. Above, his rendition of the slaughter of pilot whales in Taiji, Japan is heartbreaking. Children laugh and play on the corpses of the majestic animals. Godzilla stomps through the background elaborately decorated with social media icons and video game targets. Who are these people, are they me? 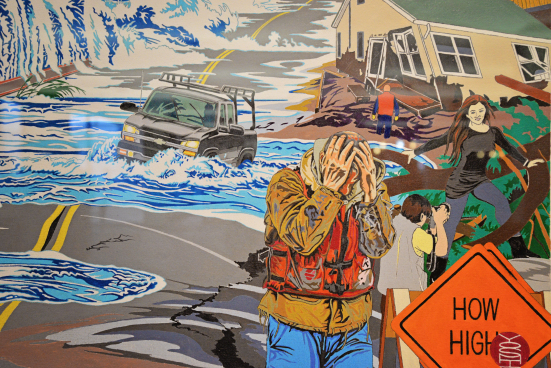 This girl here in the piece entitled “New York Minute” made me stop in my tracks. I was casually perusing the bright colors of chaos and destruction, cavalierly taking in the grief of those whose world’s had just collapsed when she caught my eye. How dare she stage a photo shoot in the midst of the aftermath, capitalizing on the pain of others for her own self promotion. It made me livid, but then another emotion caught me off guard, guilt perhaps. How many times have I taken a selfie with my kids after they get a boo boo, or gone out of my way to be a part of the action that didn’t concern me? Perhaps this woman isn’t even a New Yorker, but came for the after-quake as a tourist, drawn to an attraction. This is good art to me, colors on canvas that cause me to think and question not only society, but my own heart. 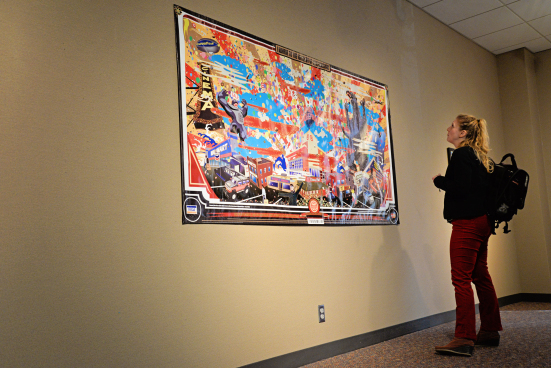 Each piece tells different story, with many recurring elements. Various bits of Latin text are scattered throughout Yoshimoto’s work, but around the edge of a digitally-made banner is a longer quote, in English:

“Shopping is a contact sport, like football. We enjoy the scrimmage, the noisy crowds, the danger of being trampled to death, and the ecstasy of the purchase. Shopping is dependable. You can do it alone, if you lose your heart to something that is wrong for you, you can return it; it’s instant gratification and yet something you buy may well last for years.”

The banner is replete with commercial imagery. Walmart smiley faces litter the sky, Target bullseyes pepper the picture as a condiment, giving flavor that hits far too close to home. The irony of so much branding being thrown at us on a corporate-made, piece of vinyl was not lost on those at the viewing. It was actually this fact that opened up a conversation, “What do you think he’s trying to say?” The gravity of this seemingly-lighthearted piece needed to be discussed, to be reasoned out together. 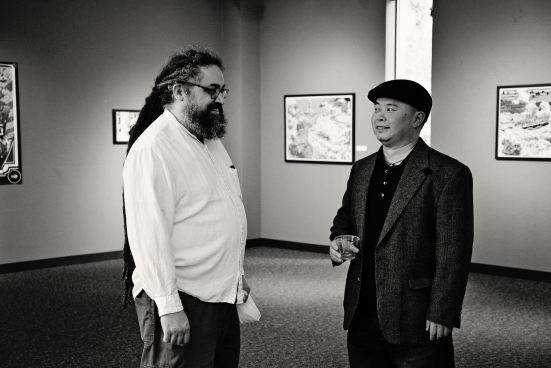 To continue carrying on this conversation, Yoshimoto will be unveiling a special, 30-foot long, scroll painting depicting the 2011 earthquake that struck Japan. In regards to this piece, he says “I just started painting like a man obsessed. I couldn’t get it out of my head. I had to commemorate their story.” Friday, March 11, will mark the five year anniversary of the tragedy, so Yoshimoto will present his piece “Baptism of concrete estuary” for a one-night event at Omaha Public Library, opens a new window. Following the short presentation at 5 p.m. the artist will be available to answer any questions during the reception.