For better or for worse, they decided to sign up, but expectations were low. 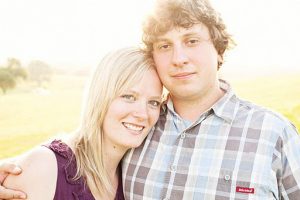 “I was nervous and needed a few drinks. I figured at least I would be with friends and have a good story to tell at the end of it,” said Jillian Liesemeyer.

“It was a high stress situation,” said Andrew Roger. “I didn’t know anybody and was just trying to be social and meet new people.”

Who could have imagined that a trip to the local library could be so angst-ridden? But this was no ordinary visit. They didn’t come to Benson Branch, opens a new window in search of the latest bestseller or DVD, they came looking for love.

On February 12, 2011, Omaha Public Library hosted its second “Hardbound to Heartbound: Speed Dating at Your Library” event. More than 70 people attended – and not all for the same reasons. Though some were certainly looking for love, others were just looking for something to do on a Saturday night that didn’t involve going to a bar, and maybe there was just a hint of hope.

“I found myself tweeting during the event that suddenly things were going better than expected,” Jillian said.

Jillian signed up with a group of her friends from her teaching program at Creighton University and made the 2 ½ hour drive from Spalding, Neb. to keep a friend company at the event. When it started, she had four minutes to talk to each man on the opposite side of the table.

“There were some duds,” she admitted.

When she sat across from Andrew, they realized that they had gone to rival high schools and teased each other throughout the short conversation.

Andrew saw something in her too, and wrote down her name as someone he wanted to know better.

“It’s like sending notes in school,” said Andrew. “You are anxious, but it’s exciting to see if they will like you too.”

The following Monday, they both received this email:

“I would like to let you know that you both said ‘yes’ to each other during the Benson Branch speed dating event on Saturday. Please feel free to exchange your information with each other… Thanks so much for participating and have a wonderful Valentine’s Day!”

After exchanging emails for nearly a month, they finally set up a first “real” date.

“We met at the Blue Line in Dundee for coffee and after talking for two hours, we walked over to the Dell for dinner,” recalled Andrew.

There were a couple more dates after that, and they were “dating” by Easter. A year later, they describe their relationship as “serious.”

Jillian lives in Kansas and Andrew lives in Omaha, so they commute every weekend to see each other. Because of the distance, communication is a key part of their relationship.

“We communicate well with each other – good and bad,” said Jillian. “We have the same ideas about life, religion, family and a vision for the future.”

As far as their future goes, it looks promising. We can only hope that they will look back someday and say, “I knew Omaha Public Library when …”