Saddlebrook Branch Manager Julie Humphrey (formerly OPL’s youth and family services manager) first learned about StoryWalk® at a conference in 2015, when the Kellogg-Hubbard Library system began promoting the idea. Humphrey thought it would work well in Omaha, but knew that OPL did not have the capacity or resources at the time. She thought of it again in 2018 after attending a meeting at Omaha’s Henry Doorly Zoo and Aquarium where organizations were encouraged to approach them with ideas for community collaborations. 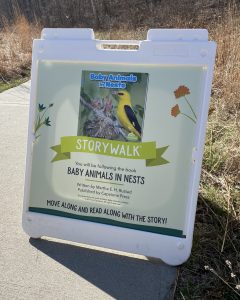 By this time, OPL had already launched its Partnership Pass Programs, opens a new window, allowing library patrons to check out vouchers for free admission to Omaha-area attractions including Lauritzen Gardens, opens a new window and the Henry Doorly Zoo and Aquarium, opens a new window. Humphrey identified this as an opportunity to promote literacy in some of the community’s treasured institutions while promoting partner passes at the same time. Both organizations were receptive to the conversation.

“This is a wonderful way to celebrate reading and the outdoors at same time,” said Humphrey. “Reading and a love of reading can happen anywhere you are, not just in a library or house.”

Education teams from all three organizations met several times to identify books that had themes to correspond with different exhibits or features at their locations. Getting publishers’ permissions to use those titles was challenging and took a couple of tries, but eventually four titles were selected and made into beautiful storyboards by the Zoo’s graphics department.

The project was originally expected to debut in April 2020, but was delayed due to the pandemic. Now all four titles are scheduled for display throughout the summer and into early fall. 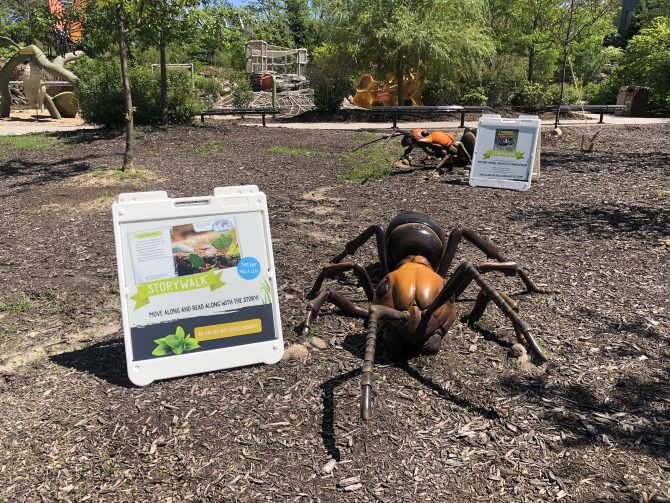 by Karen Aleo will be on display at Lauritzen Gardens from May 1-June 15, and June 16-July 31 at the Zoo.

by Rebecca Rissman will be on display June 16-July 31 at Lauritzen Gardens and August 1-September 15 at the Zoo.

“The Life Cycle of a Butterfly, opens a new window”

by Colleen A. Sexton will be on display at Lauritzen Gardens August 1-September 15 and September 16-October 1 at the Zoo.

StoryWalk® was created by Anne Ferguson of Montpelier, VT, and has developed with the help of Rachel Senechal at Kellogg-Hubbard Library.

Funding for this project was made possible by the Omaha Public Library Foundation, and through grants from the Union Pacific Foundation and the Jewish Federation of Omaha Foundation.