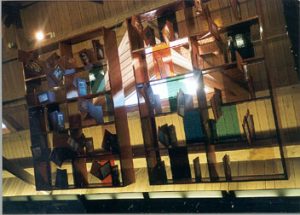 This sculpture "Ladders", for the Benson Branch Library not only addresses the formal relationship of the sculpture to the architecture, but it also addresses the dynamic nature of the library of today and of the future.
The concept of this suspended sculpture visualizes the changing nature of media in today's libraries. The spilling shelves represent the change from book-only transferal of old libraries, now becomes a symbol of the evolving means of access.

A ladder also symbolizes a reaching or striving for something higher. The colored panels, through which light will pass, represent the information and profound ideas produced by human intelligence. The curving, evolving ladder forms represent the same ideas, but show that the methods of storing and communicating information has changed to includes videos, CDs, and computer access systems. The new technology allows the transfer of knowledge through space and time instantaneously. The series of ladder-like forms, with translucent colored glass panels, computer icons and hardware, visually depict this concept. Spotlights and natural light from the high windows illuminate these forms as they gracefully float in space like messages or information emerging from the Internet.

This concept, constructed, in wood, brass and glass, integrates with the physical building as well as the library user's search for the information and enlightenment.

"Ladders," should continue to be a source of intrigue and inquiry for library patrons through the years.

The Omaha Public Library Board, OPL administration and the Omaha Public Art Commission selected "Ladders," to fulfill the promise that 1% of Benson's reconstruction costs be devoted to public art. 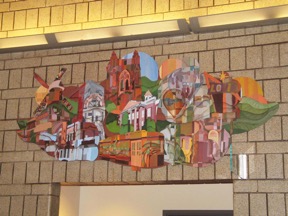 These abstract, amorphous representations celebrate Benson’s rich past and present as well as its bright future. Students focused on depicting well-known existing landmarks as well as places remembered by long-time residents and those intended for the future by community planners. Sites and emblems include the Benson High School copula, the Benson Branch Library and Benson’s insignia, composed of two back-to-back letter B's that form the shape of a butterfly. This crest was featured prominently on flags flown throughout Benson when it was an independent city prior to becoming part of Greater Omaha in 1917. Cornfields, a streetcar and roller coaster also provided inspiration for additional abstracted elements that undergo a metamorphosis throughout the piece. The artwork begins and ends with a landscape portraying the importance of Benson’s origins while similarly underscoring the community’s on-going expansion.

Inspired by well-known Nebraska artist Allen Tubach, the students created this mixed-media abstract wall relief reflective of his style both in terms of form and color. The formal shape of the overall piece is cut from plywood onto which is attached textural clay and acrylic painted plywood, all of which form the artwork’s colorful and complex background.