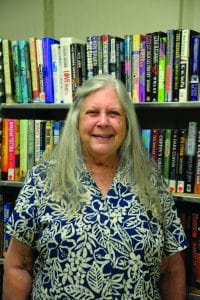 One day while shopping at the Friends of OPL book sale, Darlene Whitney noticed a flyer asking for volunteers. Whitney loves books and reading and thought, “Why not?” Fifteen years later, Whitney now coordinates the Friends book sales and has helped to transform how sales are conducted along the way.

Whitney describes herself as a problem solver. “I like being presented with challenges and figuring out how to fix them,” said Whitney.

When Whitney first started volunteering, book sales took place quarterly, and books were often stored in boxes in the hallway. Not only was this a safety hazard, but it also made it impossible to move and access the books in a practical way. Whitney approached the Friends’ board president and asked if the board would consider weekly book sales to try and move inventory and make their spaces safety compliant. Some board members were concerned it would be too much work and that Whitney would get burnt out, but she was given approval for a weekly book sale trial period. Not only were the sales successful financially, but they actually made the work easier for Whitney and other book sale volunteers. Now, book sales are held every Thursday and on the first Saturday of the month.

Unless Whitney is traveling, you will find her volunteering every Tuesday and Thursday, and during the Saturday sales, averaging 16-20 hours per week of volunteer time. She has no idea how many hours she’s volunteered altogether, but mentioned that she received recognition for volunteering over 1,000 hours in her first year. She intended to cut back some after that, but hasn’t managed to accomplish that quite yet. Whitney enjoys being among the books and getting to know them, and loves the team of people she gets to work with, including other volunteers and library staff. “They really are wonderful, and I’ve enjoyed every minute of it.”

OPL directly benefits from Friends of OPL book sales. OPL staff is grateful to all of the Friends volunteers who work to advocate and raise funds for OPL’s programs and services. Learn more about the Friends of OPL at friendsomahalibrary.org.