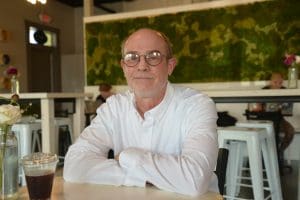 When Tom Russell walked into Milton R. Abrahams Branch during summer 1995, he was looking for a volunteer opportunity to help him develop some new skills. The manager at the time, Gloria Sorensen, informed Russell that there were no volunteer positions available, but that they did have a job opening for a part-time clerk. He decided to apply and was hired. Russell worked in that position for a short time before being hired as a full-time library specialist in August 1996.

Working in a library was not a career that Russell necessarily anticipated. After concluding his military service, Russell worked as an emergency dispatcher for several years, but grew tired of hearing bad news every day and decided to take a different path. As someone who studied English and philosophy in college, libraries called to him, and were always spaces he appreciated. Russell spent the majority of his time with OPL working at Abrahams Branch, and then transferred to Millard Branch in 2019.

Though he claims he always just did as he was told, Russell was responsible for everything from coordinating book clubs and providing computer support, to doing reference work, which was his favorite.

“I liked when people came into the library looking for obscure information and didn’t know where to start,” said Russell. “I learned something new every day."

In addition to the daily challenges presented to him at the library, Russell said he will miss the people the most.

The feeling is mutual. “What I will miss most [about Tom] is talking sports with him. I will miss his hard work, sense of humor, and the way he gets along with others. He has been a pleasure to work with and supervise,” said Millard Branch Manager Evonne Edgington.

In retirement, Russell hopes to spend more time reading, writing poetry, visiting the gym, and volunteering. On behalf of OPL staff and patrons, we are grateful to Russell for his library service and wish him all the best in retirement.