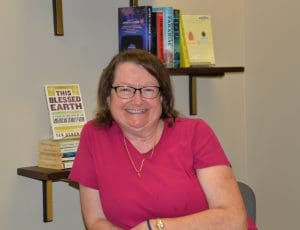 “What do I want to do with the rest of my life?” At some point (or even multiple points) in their lives, most people will ask themselves this question. Terry Wingate found herself pondering it while working in performance improvement at Methodist Hospital in the early 2000s. While this was meaningful work, Wingate felt that there might be something else that she’d find more fulfilling professionally. She’d already had a successful career in retail prior to her pivot to healthcare, and once again felt ready for a change.

Wingate realized that she always enjoyed books and reading, and started looking into becoming a librarian. Eventually, she applied to the library science program at the University of Missouri – Columbia, and was admitted. She received scholarship funds from her employer, and with her boss’s blessing, began working on her master’s degree in 2004.

Wingate was hired as a library specialist at Millard Branch in 2007, and a few months after completing her degree in 2009, was promoted to the learning and statistics manager position at W. Dale Clark Main Library. In this role, Wingate was responsible for new employee orientation, collecting and reporting library statistics, library and board accreditation, and continuing education for staff, among many other things. One of her greatest achievements was creating and implementing a formal onboarding system so that all new OPL employees would have a consistent experience.

Strategy and Business Intelligence Manager Theresa Jehlik credits Wingate’s previous work experiences for her success at OPL. “That wealth of work experiences, love of learning, and varied life experiences allow her to synthesize and extrapolate data and information from various viewpoints for the library’s
benefit,” said Jehlik. “I’ll miss her wide-ranging ability to analyze data from a very detailed level to looking at projections and trends to create a vision of what could be.”

Wingate retired from OPL on October 1. The decision came when she once again asked herself what she wanted to do with the rest of her life. She realized that her priorities had changed and she wanted to focus her time and energy on loved ones and some of her hobbies such as traveling, quilting, gardening, and
spoiling her Golden Retriever, River Finn.

Though she looks forward to retirement, Wingate said she will miss the people the most. “We have a fantastic staff,” said Wingate. “It has been a joy and honor to work with fabulous people who have made careers at OPL. I’ve loved every minute of it.”

On behalf of OPL staff and patrons, we are grateful for Wingate’s service and wish her well in retirement.