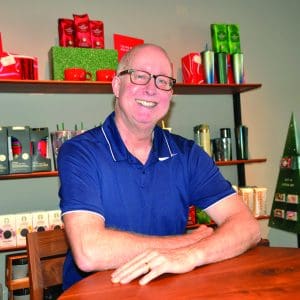 Before becoming a librarian, Paul Christopherson spent 15 years as a minister in South Dakota, Minnesota and Nebraska. When he decided to leave ministry, he sought opportunities that would allow him to work with and help others. An aptitude test pointed him in the direction of librarianship and he felt the profession would be well-suited to his skill set.

Christopherson joined OPL in 1995 as a part-time library specialist at Milton R. Abrahams Branch. In 1997, he was promoted to a full-time young adult librarian position at Millard Branch, where he worked for the next 22 years. In that time, Christopherson emphasized the need for outreach in Millard schools, and visited classrooms frequently to do book talks, promote Summer Reading Program, and celebrate reading achievements. He helped to establish a robust Teen Advisory Board at Millard Branch, which was recognized by the Nebraska Library Association Advocacy Award on three separate occasions.

While the accolades were appreciated, some of Christopherson’s proudest and most memorable moments at OPL were hearing from kids that after one of his book talks, the book became the “hottest book in school,” or hearing from a teen who stayed up all night reading a book that Christopherson recommended. “It was moving to see kids so passionate and engaged about what they were reading,” he said.

In 2019, Christopherson moved to Benson Branch as the urban gardening librarian, and was responsible for overseeing and engaging around OPL’s Common Soil Seed Library. The upward trend of seed check outs that OPL experienced since it began circulating seeds in 2013 continued with dramatic growth during Christopherson’s tenure in the position, and he helped to expand the collection to all 12 OPL locations in a visible way.

Christopherson retired on December 1, 2021, after more than 25 years of service to OPL. Christopherson will remain active in retirement with plans to continue working in a job that allows more flexibility in his schedule so that he can travel, read, exercise and take some classes.

“Working at OPL has been a great experience and some of the greatest years of my life,” said Christoperson. “I am thankful to OPL for giving me such great opportunities to serve and make a difference in the lives of people. Ultimately, I give all glory to God for the ways He has helped me to reach more people with library services.”