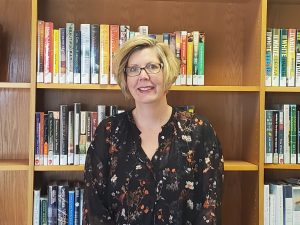 When Michelle Hoffman began working at Bess Johnson Elkhorn Branch in 1998, she didn’t necessarily expect to still be there over 20 years later. Hoffman looked for a job in the Elkhorn community once her kids were in school full time. Originally, she pursued a job in travel and tourism, but quickly realized that it wasn’t working well with her schedule. Hoffman had seen a job opening at the library, and though she had volunteered in her church library, she had no other library experience. She decided to apply anyway and was hired. She called the job “a perfect fit.”

Before Elkhorn was annexed by Omaha in 2007, Hoffman wore a lot of different hats at the library – everybody did a little bit of everything. When Elkhorn Branch became part of OPL, she had a more structured role as a library specialist, which involved organizing book clubs, teaching computer classes, creating displays, and supervising library aides, a responsibility which she really grew to appreciate. “I loved to see new staff come in and watch them grow,” said Hoffman. “I also learned that developing others was one of my top strengths. I didn’t see it in myself, but others did.”

While working at OPL, Hoffman discovered that she learns something new every day – either from patrons or coworkers. “Each day is interesting, fresh and different.” She also loves working in the community where she lives, and often finds she may know the answer to a question just because she’s been there and watched Elkhorn grow right before her eyes. She knows that her position at the library has provided a unique position and platform.

“People tell me a lot of things,” Hoffman said. “Whatever they are going through, I can connect them with a resource that can help them.”

Hoffman’s last day with OPL was April 30, and even in retirement, she plans to continue her service to the community. Of course, there are things she wants to do to her home and she’d like to travel more, but she also wants to volunteer with her church and help to organize Elkhorn’s community history, and possibly develop a tour of historical Elkhorn – a perfect marriage of her tourism and library background.

Thank you, Michelle, for your more than 22 years of service at Bess Johnson Elkhorn Branch.