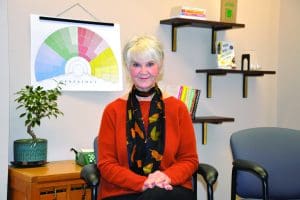 Jody duRand joined the OPL staff in 2006 as the business manager. She originally worked in the finance office, helping to prepare and organize the library’s budget. While duRand implemented several strategies to help organize and streamline budget processes, former Library Director Gary Wasdin recognized that her skill set may be better utilized in a different role and, in 2011, asked her to become the volunteer and partnership services manager.

This role turned out to be a great fit for duRand, who brought a unique perspective to her work because of her diverse professional experiences. “I saw the value in partnerships,” said duRand. “I always thought about how to come to the table and find common ground. I worked with others to gather information and make plans that we hoped would make an impact.”

In 2014, duRand and her team of outreach staff moved into the newly constructed Barbara Weitz Community Engagement Center at the University of Nebraska, Omaha. This provided OPL with the opportunity to connect with other area nonprofits throughout the city, and to explore how they might work together for the
betterment of the community.

One of those partners was Nicole Everingham, development director for Collective for Youth. Everingham explained that Collective for Youth conducted after-school programs in Omaha middle schools, along with participation from OPL and Omaha Parks and Recreation. “When Jody came on board, there was a
switch,” said Everingham. “She had a vision for developing multi-dimensional programs that helped make books come to life.”

duRand transformed OPL’s role in after-school programming, revamped the Baby Reads program by involving partners that could help emphasize the importance of reading to new parents, and was able to develop relationships with educators at the Douglas County Youth Center to provide book clubs and speakers for incarcerated youth, among many other accomplishments.

January 8, 2022, was duRand’s last day with OPL, and she has high hopes for the future of OPL’s outreach. “I built something that I felt was important, and am leaving it in a better place. Now it’s time for someone else to take the opportunity to grow it.”

OPL Assistant Director Rachel Steiner shared, “It has been a joy to work with Jody! Her enthusiasm for connecting the community to the library and books has shown through the many organizations she’s connected with over the years, especially the after-school program. I will miss her excitement around new projects and ideas and the way she rallies for the library and the good it brings to the community!”

On behalf of those who have had the pleasure of working alongside duRand, as well as the many people she impacted through her work, we wish her all the best in retirement.