In 1995, a group of volunteers transformed a vacant lot at 4002 Seward St. into a community garden. Since then, it has blossomed into the thriving gardening education nonprofit known as City Sprouts, opens a new window. The organization works to provide space, workshops, and summer internships for teens; and to empower the public to sustainably grow, eat, provide and promote healthy local foods.

City Sprouts expanded to South Omaha in 2015, adding another community garden at 20th and N streets. Alex O’Hanlon joined City Sprouts in 2017 as the south garden manager, and has worked to expand the organization’s presence, as well as her knowledge on all things related to sustainable farming. 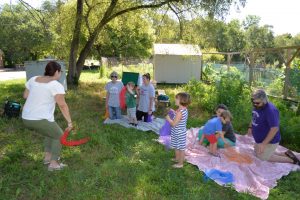 OPL hosted Out & About Storytimes, opens a new window at City Sprouts South this past summer in an effort to reach patrons whose access to the South Omaha Library, opens a new window may have been impacted by the Q Street Bridge closure, but this wasn’t the only collaboration between the organizations.

O’Hanlon and Cait Caughey, education director at The Big Garden, attended the Rocky Mountain Seed Alliance’s Seed Saving Teacher Training course in fall 2018. “We came back more inspired by what City Sprouts and The Big Garden could do together to promote seed saving in Omaha,” O’Hanlon said.

They decided to start an initiative to stock OPL’s Common Soil Seed Library, opens a new window. with locally-grown seed. “The Common Soil Seed Library is there year-round for people to use as a resource,” said O’Hanlon. “Having it at OPL opens up the idea of gardening and seed saving to a larger group of people, as does partnering in other ways to promote local gardening.”

This year, OPL, City Sprouts, The Big Garden and Big Muddy Urban Farm teamed up to expand the general public knowledge and awareness of seed saving and its benefits through the “Seed of the Year” program, opens a new window. The rattlesnake bean was selected for the honor because it is relatively easy to

grow, eat and save for seeds. O’Hanlon and Caughey sourced seeds from Meadowlark Hearth Farm in western Nebraska and have distributed them throughout the year to anyone interested in growing them, encouraging everyone to eat the beans, but to also save some for their seeds at the end of the season.

On November 2 and 3, City Sprouts and The Big Garden will host Seed School, opens a new window, a two-day, intensive training that covers planning for seed saving, history, importance, selection and isolation techniques. Anyone who’s grown and saved rattlesnake bean seeds is invited to attend, bring their beans, learn how to process them as a group, take some home, and donate the rest to the Common Soil Seed Library. The event is also open to anyone who is interested in learning more about seed saving.

Anyone with questions about the Seed of the Year may contact O’Hanlon at gardensouth@omahasprouts.org, opens a new window. Learn more about the