An item that has been part of OPL’s collection for more than 115 years is one that many people are not aware of, but has a very interesting background.

William Thompson was an Englishman in search of adventure and found it while working as an employee of Union Pacific Railroad in 1867. Making his way across the western frontier with a crew of men, Thompson got more than he bargained for when the group was ambushed by members of the Cheyenne tribe. Though accounts of the attack are varied, it is widely accepted that Thompson was shot, scalped and left for dead. Not only did Thompson survive, he was able to retrieve the scalp in hopes of having it reattached. Though this wasn’t possible, Thompson had the scalp tanned and carried it with him back to England. Years later, he sent it back to Omaha to the doctor who attended to him, who in turn donated it to OPL. 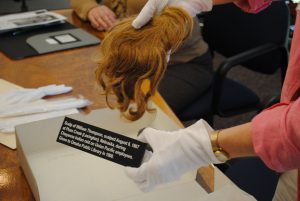 This 145-year-old story lives on and serves as a reminder of a volatile time in our nation’s history.