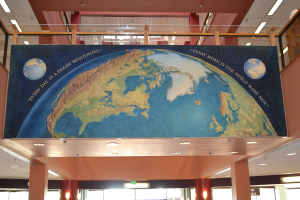 The recently restored Eugene Kingman mural, which hung for over 40 years in the lobby of The New York Times, now has a new home at W. Dale Clark Main Library. In 1946, Arthur Hayes Sulzberger, publisher of The New York Times, commissioned Eugene Kingman to paint an inspirational mural for the lobby of the Times headquarters in New York City. Kingman, a nationally-known artist and muralist, was about to move to the Joslyn Art Museum in Omaha where he would become the second director for the organization.

The mural was painted in Omaha at the Joslyn Art Museum and, in 1948, was installed in the lobby of The New York Times. It remained there until the late 1980s when it was taken down during remodeling. In 2013, a group of Omaha art lovers, led by Maureen McCann Waldron, began working with the Kingman family and The New York Times to return the mural to Omaha. In 2014, the Times donated the mural to The Joslyn Castle Trust.

The mural features a view of the world as it might have been seen from space, and also features a line of poetry by Sarah Chauncey Woolsey, “Every day is a fresh beginning ~ Every morn is the world made new.” “OPL is thrilled to have the Kingman mural installed at its W. Dale Clark Library,” said OPL executive director Laura Marlane. “The location is ideal for making the mural accessible to our community and Omaha visitors alike. The mural is also truly representative of what the library is about -- opening your world to new opportunities and experiences.” 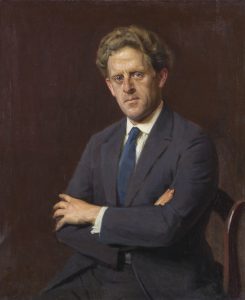 The portrait features a seated Neihardt gazing at the viewer with folded arms.

J. Laurie Wallace painted the portrait in 1922. Wallace has an excellent reputation as an artist. His portraits are particularly known as being of the highest artistic quality as well as capturing the spirit of the subject.

John Laurie Wallace was born in Garvagh, Ireland, in 1864. He immigrated to the United States as a child of four. He later became a student of American painter Thomas Eakins. Wallace came to Omaha, Nebraska, in 1891. He enjoyed the area so much he didn't leave until 1927. He died in California in 1953 at 89 years of age. J. Laurie Wallace is buried in Omaha's Forest Lawn Cemetery. Wallace's influence as a painter, sculptor and teacher continue to reach art lovers everywhere. 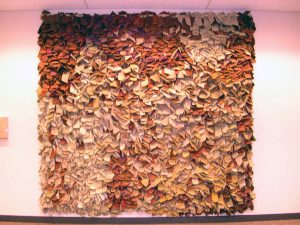 Amaral's work originated as small, playful tapestries which gradually emerged into the monolithic style seen in her later pieces. These large abstract works create their own presence. Her signature use of somber colors and textured wool in a layered pattern characterize Olga de Amaral's mature technique. 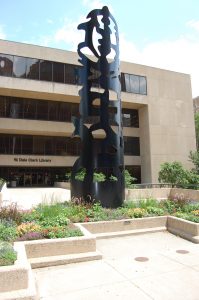 The animals shapes depicted in Totem are recorded in The Iowa Effigy Mound Manifestation: An Interpretive Model by R. Clark Mallam, University of Iowa Office of the State Archaeologist, 1976. The effigy mounds were earthen representations of mammals, reptiles, birds and geometric forms along the Upper Mississippi River built by hunting and gathering people prior to 1300 A.D.

While carefully replicating the ancient shapes of the earth effigy mounds, the contemporary Totem was fabricated of aluminum with the aid of computers and the calculations of engineers.

Since Ferguson discovered Mallam's book at the W. Dale Clark Library she has created several sculptures based on effigy animals. Totem, finished in 2004 is the sixth in the series.

Totem was commissioned by the Omaha Public Art Commission with funds donated by the J. Doe Project. 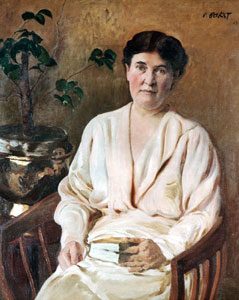 The 1923 portrait by Leon Bakst of Nebraska author, Willa Cather, depicts her in a white dress and pink sash, seated in a sunroom. She appears perfectly at home in this setting as well as the Nebraska prairie.

Leon Bakst was born on May 10, 1866 in Grodno, Belarus, to a middle class Jewish family. He was educated in St. Petersburg, Russia, at the Academy of Arts.

1898 saw the beginning of the World of Art (Mir Iskusstva) group with Alexandre Benois and Serge Diaghilev. Bakst is perhaps most famous for his stage designs with Diaghilev's Ballet Russes. He created more stage sets for Dialghiev from 1909-1921 than any other artist. Leon Bakst moved permanently to Paris in 1912. As a Jew, he was unable to get a residency permit in St. Petersburg, Russia.

Bakst was probably the most versatile artist in the World of Art group. In mid-career he was able to make stylistic changes. Leon Bakst's portraits are renowned for their relaxed poses and animated line. 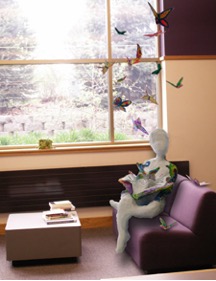 This sculpture symbolizes how reading can set the imagination free. The butterflies represent freedom through imagination, and their flight up and throughout the library signifies that reading provides the connection to wonderful, magical thoughts and images. As the butterflies begin to “morph” from the book, the figure experiences liberation as her imagination “takes flight.” The project illustrates that books can take individuals to whole new worlds and that imagination can be taken to new heights – just like the swirling butterflies. The students painted the figure, who is holding an open book, with brightly colored swirls emanating up her arms to symbolize that her imagination is “taking off” as she reads. From the pages, the shapes of butterflies begin to transform and emerge. Initially, they are slightly colored, but as they ascend to greater heights, they become more detailed and colorful. Additional butterflies are positioned throughout the library as well as close to the window, as if they trying to get out to the rest of the world where their flight can become increasingly fanciful.

Above All Others Upon a Stream 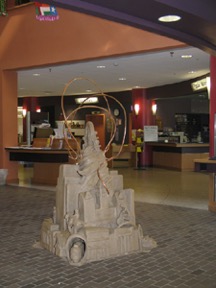 The title of this piece, "Above All Others Upon a Stream," is the translation of the Native American word eromaha for which Omaha is named. This city has always served as a center of commerce and culture for the Midwest. Both the Missouri River and Union Pacific have directed people to and through the city for over a century, making it an active and significant location not only for Nebraska, but the entire country. To portray this concept of centrality, the students chose the image of an atom with downtown Omaha as its nucleus. The electron orbits are represented by the various modes of transportation that have made Omaha such a catalyst. The image of the atom itself is abstracted, with the rings flowing down to the base of the sculpture after circling the nucleus. The paths of the rings – a railroad and a river – course through the city below, which creates movement and unity throughout the piece. The base of the sculpture features a bustling city with figures and buildings that span multiple generations, and different time periods intertwine to create a universal cityscape. The students constructed the work entirely in clay, and noted artist Les Bruning helped them build the sculpture’s inner structure out of metal to support the surrounding material. As a whole, the piece communicates the importance and vibrancy of downtown Omaha: today, in the past, and in the future. 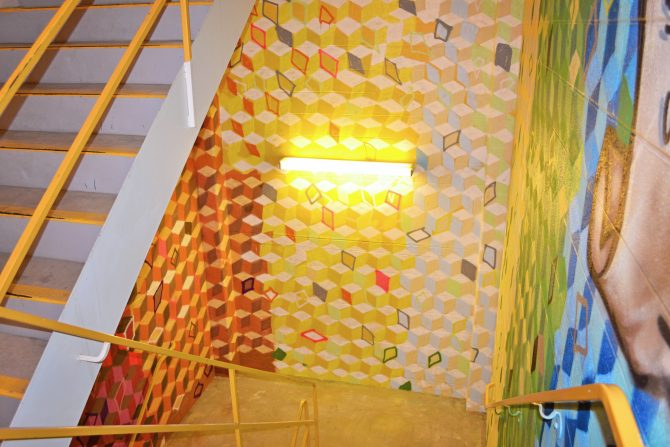 Students from the Kent Bellows Studio Urban Arts Program took over the stairwells of W. Dale Clark Main Library! Six high school students developed an art concept and design for the stairwell walls by working with mentors Steve Walsh and Gerard Pefung. The two murals “combine inspiration from the written word and books, and from the visual vocabulary of street art,” said Weston Thomson, education manager of the Kent Bellows Studio and Center for Visual Arts. Throughout October and November 2011, the young artists worked on bringing the concepts to reality. The contemporary, urban art designs of the stairwells will feature a scroll of great thoughts, winding its way up the stairs into the library and a graffiti-inspired representation of reading and learning. “This partnership provides a fantastic creative opportunity for Omaha’s youth and results in spectacular murals for the library,” said Gary Wasdin, former OPL executive director.