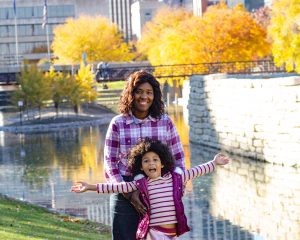 Now that she has a daughter of her own, whom she homeschools, Abrahamson has continued to frequent OPL locations for learning materials, as well as books to read for pleasure. In 2018, she attended a meeting at Main Library for the Forgotten Omaha Facebook group, where she met Martha Grenzeback, OPL’s genealogy & local history librarian.

Upon learning of Abrahamson’s interest in local history, Grenzeback recruited her to assist with a project researching the histories of local restaurants. This research is indexed with digitized menus , opens a new windowfrom Omaha restaurants, which OPL received as a donation from Jim Trebbien, chair of the board of the Omaha Hospitality Hall of Fame and former dean of The Institute for the Culinary Arts at Metropolitan Community College.

“I’m always looking for people who are interested in researching photographs or menus in our collection, for indexing and creating metadata,” said Grenzeback, adding that you don’t need a master’s degree in library science, just passion for the work and training.

While researching restaurants, Abrahamson says that she’s “fallen down a rabbit hole of Omaha history.” For instance, while researching The French Café (one of more than 500 menus that have been digitized for the collection), she learned about the beginnings of Omaha’s Old Market district.

“It’s fun to learn more context about the places I’ve grown up around and the areas I’ve frequented,” Abrahamson said.

When OPL locations closed in March 2020 because of COVID-19, Abrahamson had some time off from her weekly volunteer shifts. Eventually she was able to continue working on the project from home using the internet and resources like Ancestry for Libraries, opens a new window, which extended at-home access through December 31, 2020.

Though there is still a lot of research and indexing to be done, Grenzeback said that assistance from Abrahamson is helping to expedite the creation of a historical directory of Omaha’s restaurants. In a year where more restaurants have closed their doors than normal, this project seems all the more important to Abrahamson, who emails Grenzeback about any new closings she discovers.

Abrahamson said she enjoys giving back to an institution and staff that have given her so much and recommends that others consider volunteering, opens a new window at OPL once volunteers are allowed to work at branches again.