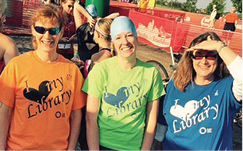 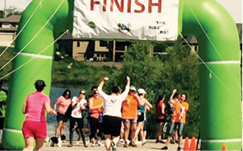 The Omaha Women’s Triathlon brings together women of all athletic abilities to promote the pursuit of healthy and active lifestyles. The event consisted of a 750m swim, a 20km bike ride, and a 5k run. Teams had the option to participate in the event as a relay, with each member of the team completing one leg of the triathlon. This option encouraged Klein-Hewett to join the team. “I have always wanted to try a triathlon, but cycling isn’t a strong suit for me,” said Klein-Hewett. “Having the opportunity to do a triathlon as a team let me experience the swimming portion of the race without having to commit to the whole thing. Plus, being able to do it as a team was fun! We supported one another during our training and on the day of the event.” Congratulations Laurie, Megan and Cynthia on a job well done! In case you’re curious, books about triathlons can be found in the 790s section of the Dewey Decimal System, under “recreation.”