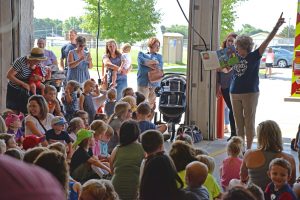 Karen Berry has a long history with OPL. Growing up, she and her siblings visited Benson Branch, and she still can visualize OPL’s Bookmobile pulling into the parking lot of her elementary school for its biweekly visits. Technically, helping escort younger kids to the Bookmobile, stamping library cards and restocking picture books was her first library job.

In high school, she regularly visited North Omaha Library, now Charles B. Washington Branch. To this day, she can see the face of the librarian there and hear her “shush” Berry and her friends nearly every time they entered the building. Looking back at it now she laughs, but admits, “It also makes me a little angry because a couple of the kids walked out and never went back."

That interaction initially made Berry hesitant to pursue library work. “I was afraid I would not like it,” she said. “I think maybe in the back of my head, the shushing was always in there.” However, after landing her first position at OPL in 1994, that memory became Berry’s guide for what she wanted to do differently.

Throughout her career at OPL, Berry has focused on building relationships with patrons. Having worked at every branch except W. Dale Clark Main Library, Berry’s extroverted and zany personality has made her so well-known that she’s often recognized in public by people who know her through the library. She recognizes them, too.

Bess Johnson Elkhorn Branch Manager Sarah VanRaden marvels at Berry's ability to remember names and faces of children and families she interacts with, whether at the library, school visits, Out & About Storytimes, or elsewhere. “I think that’s really special and that helps make the library feel comfortable and like home for the kids -- that they’re remembered and not just another face in the crowd,” VanRaden said. 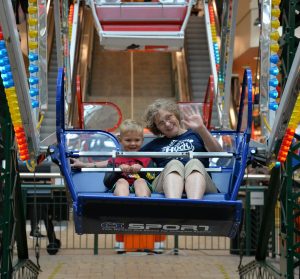 Unsurprisingly, interacting with patrons is Berry’s favorite part of her job. “I learn something almost every day from helping customers find something, doing research for somebody, or them telling me something about a book… It’s that interaction with people that makes it exciting,” said Berry.

Berry has worked at nearly every OPL branch, spending the past five years at Elkhorn Branch. She has watched children grow up right before her eyes, helping to erase any doubts she ever had about working at the library.

Berry proudly asserts that she made the right career choice. “It’s the best job I have ever had in my life,” she said.