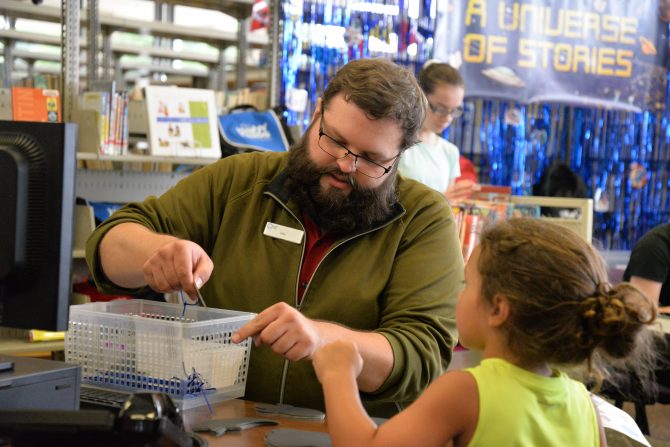 Jacob Lee began working at OPL nearly nine years ago, serving in several positions throughout his tenure. He began as a cataloging aide in the Collection Processing department, then moved into the role of interlibrary loan clerk. While pursuing his master’s degree online, he was hired as a cataloguer at Bellevue University’s Freeman/Lozier Library and continued to work for OPL as a floating aide who split time among the system’s 12 branches.

After completing his Master of Library and Information Science degree in 2017, Lee applied for the position he currently holds: OPL’s senior services subject librarian. While he does not have a background in gerontology, positive past experiences working with older patrons led him to apply for the position.

One of the things Lee enjoys most about his job is “getting to introduce our older adult patrons to what the library might have to offer them, especially in our databases.” He finds himself frequently promoting resources like Consumer Reports and Gale Courses as well as services like the Homebound Program, which allows patrons whose physical impairments prevent them from visiting the library to request books by phone and receive/return them via the U.S. Postal Service free of charge.

Whether he’s acquainting patrons with newfound services, helping them submit job applications, or tackling whatever other tasks he encounters at Millard Branch, Lee says he has “always wanted to help people, which was a big part of what kept me working in libraries.”

OPL’s adult services manager Amy Mather says Lee excels in his role. “[He] has done an amazing job of providing patrons with essential information. He is thoughtful in his approach in caring for patron needs and his attention to detail and thoroughness of each request is exceptional.”

Moving forward, Lee hopes to increase his outreach to older adults and learn more about what they want and need from OPL. His goal is to take each need into consideration and work to build a database of resources that he can direct patrons to for their individual needs, at OPL or elsewhere in the Omaha community.