Farhana Husain first applied to be a clerk at OPL in 2013. Husain didn’t have any training or experience working at a library, but left Branch Manager Marvel Maring with such a strong positive impression during her interview that Maring said she was ready to fight to get Husain on her staff. 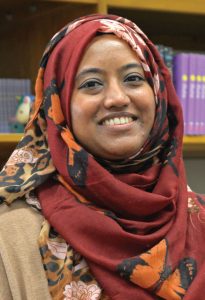 “I knew that she would be an asset to the staff at [Milton R.] Abrahams Branch and she always was,” said Maring. “She’s rock solid, has good instincts, and the most important thing is how she radiates all that positivity both for the patrons and the staff—it’s part of her being."

What began as a job to earn some extra income for her family evolved into a labor of love for Husain, who has spent the past seven years in various roles at OPL. After working as a clerk for one year, Maring and other OPL administrators encouraged Husain to apply for a specialist position, which brought her to W. Clarke Swanson Branch. She worked there as a youth services specialist for six years, until another opportunity presented itself in early 2020.

OPL’s Community Outreach and Partnerships department approached Husain regarding a position working on after-school programs in Omaha Public Schools (OPS). Leaving her position at Swanson Branch was a difficult decision, but Husain said she looked forward to serving more people through the innovative programming and initiatives that her new position offered.

“I loved my job at Swanson,” Husain said. “Being at a library is great because you’re working with people who want to be there and love being there. It’s nice to be able to take that out to the community, to people who might not have the same opportunities, but who would love it just as much.”

Due to the COVID-19 pandemic, things are a lot different than Husain had originally anticipated. She’s spent much of her time in her new role helping the team move their after school programming at eight OPS middle schools to an online format.

Husain has shadowed her coworkers as they lead online sessions with the middle school students across the city and helped prepare kits of materials that are distributed to participants. While the format has changed, the goal of the programming remains the same—to provide a safe space for students and to build relationships while promoting literacy.

“We try to have interactive activities for them to do in a space where they don’t have to be muted, which is something they don’t get to do very often during the school day,” Husain said.

Soon Husain will lead a group of students at Nathan Hale Magnet Middle School on her own. Eventually, she hopes to use her experience to help the outreach team bring similar after-school programming to OPS elementary schools. For now, she’s learning about working in virtual spaces, while continuing to spread her warmth, kindness and knowledge about OPL.