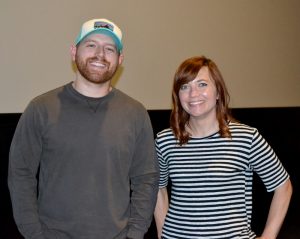 Entering into a debate that has lasted nearly a century, Alamo Drafthouse, OPL and The Bookworm have partnered to present a friendly discussion surrounding the question: book vs. film? In March 2016, Alamo Drafthouse introduced its first feature film in the “Novel Pictures” series, The Big Sleep. This 1946 film was based on the novel of the same name by Raymond Chandler. Nearly 70 people attended the premier event, followed by a sold out showing of Fight Club (1999 film based on the 1996 novel by Charles Palahniuk) in April. “I’m a big fan of reading,” said Alamo Drafthouse creative director Derek Michael Dillon. “Working in a book angle for one of our programming series seemed like a natural fit with our brand. Having OPL working with us made complete sense.” The series is geared toward individuals who have read the book and may or may not have seen the film. Following a brief introduction of the series, participants watch the film and are invited to stay afterward for a healthy discussion. “I think this is a great example of the Library getting out into the community and just talking about books,” said Benson Branch library specialist Erin Duerr. “Fostering excitement, discussion and interest in books are the main goals. This event is an opportunity to get in front of a group of people that we might not see in the Library, and possibly shift some perspectives about the Library.”