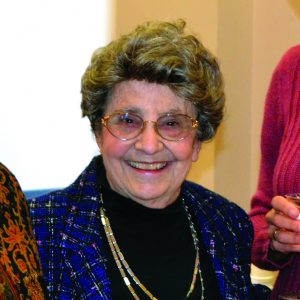 Some people have roots in the community so deep and invaluable that it’s hard to do them or their contributions justice. Kay Bashus is one of those people.

Bashus, a Friend of Omaha Public Library (FOPL) for two decades, is a longtime library lover, volunteer and supporter. She has played in integral role in shaping OPL.

“I can’t remember a time in my life, no matter where I lived, when I didn’t have a library card,” Bashus recalled. “Does that make me a library groupie?” She moved to Omaha after college and fell in love with the old Main Library downtown. “Even after marriage and five children, we regularly trouped down to Main, and sometimes the new Willa Cather branch for our books, and used the Bookmobile when it came to our Dundee neighborhood in the summer.”

Bashus seized an opportunity when a Dundee grocery store closed in 1973. She teamed with Kitty Prinz and rallied the neighborhood in support of a library/community center in its spot. They established R.E.A.D. (Recreation Education Association of Dundee), with Fran Schroen at the helm. Facing budgetary restraints, “we were rescued by the generosity of former Mayor A.V. Sorensen who donated land at 48th and Cass Streets. The rest is history,” Bashus concluded. The A.V. Sorensen library-community center opened its doors to much fanfare in 1976; it’s still going strong today.

Bashus has been busy with library since the early ‘90s. She joined a library advocacy group, became a FOPL member and eventually served on the Friends board as treasurer and president. Since then she has donated her time and expertise to Friends book sales and various OPL programs and initiatives.

Community Outreach Manager Linda Trout said Bashus is nothing short of a community leader, a mover and shaker. “Kay Bashus is one of the most dedicated library supporters and volunteers I know. For many years she has been a strong advocate of OPL and its staff, often seeing needs where others don’t. OPL is much richer with devoted supporters like Kay.”

Bashus contends she couldn’t have achieved all of this alone. “Over all these years I have thoroughly enjoyed working with Friends and library staff, as well as people from all walks of life who have invested their time and considerable talents to promote and help OPL. If one thing is true, no job is accomplished alone, but only with the help of other people. In and out the years they are the lifeblood of all our efforts.”