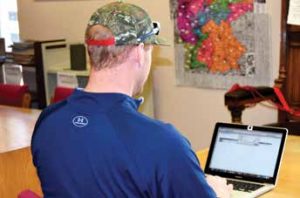 Many people can remember doing research the old-fashioned way: poring over old newspapers using microfiche or microfilm. While much Omaha history is still preserved in this format, researching the Omaha World-Herald archives became much easier with the acquisition of its digital archives (1885-1983). OPL patrons had been using this valuable resource as a trial since May 2012, and it was added to OPL’s permanent collection in early 2015.

The digital archives allow people to search for and see historic newspaper stories and advertisements for free through a computer database that is easily navigable, savable, and printable. The resource was made possible through the fundraising efforts of the Omaha Public Library Foundation, with a very special consideration of The Gilbert M. and Martha H. Hitchcock Foundation, which made the lead gift, thereby securing naming rights of the digital archives.

The late Gilbert Hitchcock founded the Omaha Daily World newspaper in 1885 and served as its publisher. In 1889, he purchased the Omaha Herald. Following the Herald’s acquisition, Hitchcock consolidated it and the Daily World to create the morning and evening editions of the Omaha World-Herald. Neely Kountze, president of the Hitchcock Foundation, is Martha Hitchcock’s great-nephew. “My Great-Aunt Martha started the Hitchcock Foundation to posthumously honor her late husband,” Kountze said. “If she were alive today, I think she would find the Omaha World-Herald digital archives a marvelous way to preserve and make available to the public the beloved newspaper Gilbert gave birth to more than 125 years ago.”