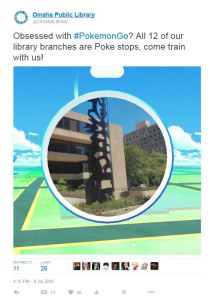 “You may have already heard about a tiny little cultural phenomenon, known as Pokemon Go. People are OBSESSED with this app” writes Krystie Lee Yandoli for Buzzfeed, who featured a tweet from Omaha Public Library on Wednesday.

Pokemon Go is finally live in North America, so you can now travel anywhere and everywhere to complete your Pokedex… even your local library. That’s right, all 12 Omaha Public Library branches are Poke Stops that can replenish your ever dwindling supply of Pokeballs and potions.

My husband and I have been Pokemon fans since we were little, so we couldn’t wait for Pokemon Go to come out. We explored Benson to see if any landmarks or businesses nearby were Pokemon Gyms or Poke Stops. We were surprised to find about a dozen Pokemon hotspots in the area, including the Benson Branch where I work! 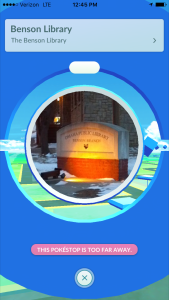 While at the library, my husband caught a Pidgeot, as well as a couple of Rattata, Caterpie and a Haunter. All the while I tried in vain to locate and capture a Vulpix that simply refused to appear. However, on my lunch break I had better luck locating and capturing a Pidgey and a Weedle.

The app is simple and addicting to play. I can’t wait to explore other areas in and around Omaha, as I’m hoping to encounter more unique Pokemon. At the top of my list is exploring Fontenelle Forest and the Henry Doorly Zoo to encounter some bug type Pokemon as well as traveling to the Joslyn Art Museum and the Children’s Museum to capture some psychic types. While at the library, I have encountered many different types of Pokemon including flying, ghost, grass, bug and fire.

Only the first generation of Pokemon is available right now. For anyone who doesn’t remember back to the 90’s, this includes 151 different types of Pokemon <–relive the throwback song! There will probably be updates to include the other generations, so eventually you will be able to catch and battle with over 721 different Pokemon. 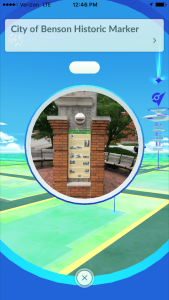 The best way to encounter Pokemon is to walk around your neighborhood. While Pokemon will appear at random if you are at home or work, it’s best to visit other places to encounter different Pokemon. Plus, you will need to visit Poke Stops (like the library!) to replenish your supplies of Pokeballs and potions. It’s also important to remember that to progress in the game you simply can’t capture one of each Pokemon. You need to capture multiples of each in order to evolve the Pokemon as well as increase their power level.

My collection of Pokemon isn’t strong enough yet to take on a Pokemon Gym, but I am working on it. You may notice as you walk around your neighborhood that Pokemon Gyms can be yellow, blue, or red in color. These gyms are controlled by different teams and you will have to battle them to test your Pokemon’s strength. Once you get to level five you can choose to be a part of a team: Team Valor Red, Team Mythic Blue or Team Instinct Yellow and then you can battle against rival team’s gyms. 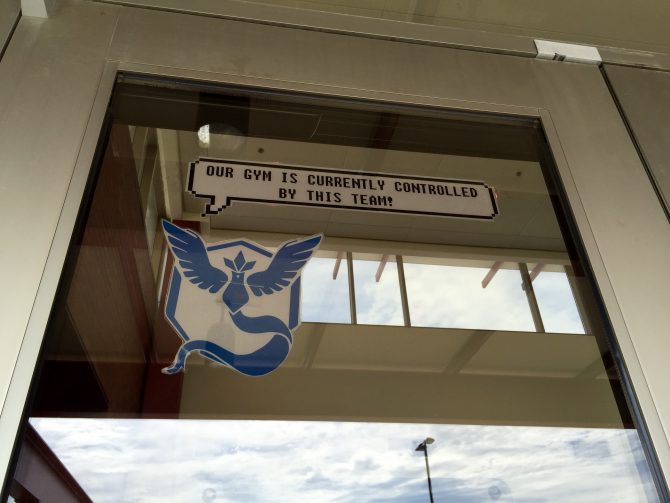 It’s exciting to see that so many community oriented organizations are Poke Stops and Gyms. Omahans are really coming together and getting into this game! At the Millard Branch, opens a new window, for example, signs are posted on the doors letting players know which faction controls their gym. So, if you want to battle against the Mythic Blue team, head that way!

Later this month, OPL librarians are scheduling a city-wide event to teach students how to be safe while playing, as well as lead them on a Pokemon hunt through the city! We’ll use lures to attract more Pokemon and help you catch ’em all! Stay tuned to the events calendar for more information on that!

Pokemon Trainers, go forth! Explore your local library in addition to replenishing your supply of Pokeballs. You might encounter a variety of stories and facts, as well as Pokemon to complete your collection! 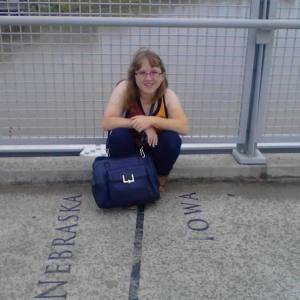